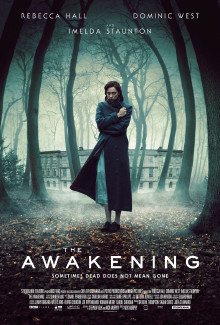 All the children are gone… except one.

London, 1921, war and epidemic in recent years killed more than a million lives in the UK. A large number of people were left alone, trying to find the salvation from their sorrow for the lost loved ones in the supernatural things. This situation leads people in Britain to only one conclusion: this is the time of ghosts!

Florence Cathcart (Rebecca Hall) is not only young and successful writer, but also a “ghost hunter”. How is and itself lost a loved one during the war, she has big a motive to detect people who use supernatural things, especially spirits, in order to take advantage of the current situation and the feelings of these people. Everything are changed when on the doors of her house appears Robert Mallory (Dominic West) professor of history at a boarding school for boys. At this school are happened the murder three weeks ago, the boy who died, a day before his death was claimed to have seen a ghost boy, who was killed in the same place a few years ago. Florence was at first hesitated, not wanting to accept a job. However, word orphaned on her has a major impact, since it is itself as a child was orphaned. From that moment and her departure to boarding school, at the same time begins two stories, one about a boy who was killed and other, more interesting, Florence and her for many years hidden away fear…

The Awakening is a film about ghosts, old school and action that takes place 1920s. Most of the people would think that in question another series of bad movies that are a mixture of horror and thriller. But when you see the film, the conclusion is that it is more than a solid achievement.

Rebecca Hall in the role of Florence as the main character and central figure of the film is person that almost do not believe in ghosts, but that “almost”, that little part of her is still on the other side which is totally overtakes and shows her in its true light. Her story becomes a psychological, a thriller in which we discover how the trauma of a child eventually turns into fear and panic at adult person. The story begins slowly and as time goes on, becoming more intense with an excellent ending.

While not a masterpiece of the genre and there are obvious flaws and omissions, the film definitely should watch because having few good scenes and more than a good scenario. Recommendation!