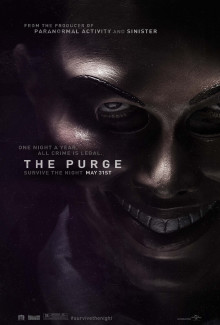 One night a year, all crime is legal.

America has experienced a new revival of the nation, unemployment is very low, crime is at its minimum, and the violence is almost nonexistent. This was achieved thanks to the New Founding Fathers of America and their new program ˝The Purge˝. The Purge means that once a year for a period of 12 hours is allowed all criminal activities (murder, theft, rape …). During this action should not be harmed government officials with a ranking 10 and it is forbidden to use weapons above Class 4. Emergency services and the police during this program will be unavailable. The Americans has the opportunity to get rid of negative energy and people who bother them.

James Sandin (Ethan Hawke) is a vendor of security systems for the home. He with his wife Mary Sandin (Lena Headey), daughter Zoey (Adelaide Kane) and son Charlie (Max Burkholder) lives in a rich neighborhood in Los Angeles in house that provides the best security system specifically designed for purge. Problems begin when Charlie let into house a stranger (Edwin Hodge) who is haunted by a group of masked men. The leader of this group Polite Leader (Rhys Wakefield) demands that surrender the person which they hides or else they will themselves come for him. Shortly thereafter, James admits to his wife that the security system has flaw…

Unfortunately, except for the original theme, The Purge primarily due to poor implementation, failed to capitalize on its potential. The combination of one-dimensional characters with bad dialogues and with a lot of failures and a bunch of clichés will make that this film very quickly fall into oblivion.