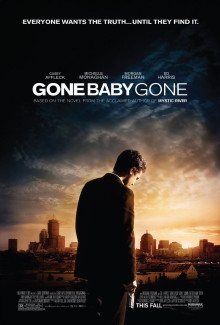 Everyone Wants The Truth… Until They Find It.

Thirty-one year old Patrick Kenzie grew up in Dorchester, a working class neighborhood of Boston where the family names remain the same over generations. He still lives there with his personal and professional partner Angie Gennaro, the two who are private detectives specializing in missing persons cases. The police are working on a high profile case of an abducted four year neighborhood child named Amanda McCready. The Boston Police Department take child abduction cases to heart because the daughter of Jack Doyle, the police chief, had been abducted and eventually murdered years earlier. Three days after Amanda’s abduction, Patrick and Angie are hired by Lionel and Bea McCready, Amanda’s maternal uncle and aunt, to augment the police investigation. Despite this case being outside of the norm of Patrick and Angie’s regular cases, the McCready’s hope that Patrick’s knowledge of the neighborhood and its people will help, especially in getting the neighborhood underlife to open up, especially if they are not willing to speak to the police. Patrick and Angie quickly learn that Amanda’s single mother, Helene McCready, is no saint, she being a drug runner and involved in the theft of drug moneys. Patrick, Angie and the police believe that her criminal history has something to do with the abduction. As Patrick and Angie get further into the investigation with the police, they collectively deal with issues of whether the means justifies the ends, and whether the end goal is morally the right thing to do.