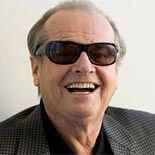 Jack Nicholson is an American actor, film director, producer, and writer. Nicholson has twice won the Academy Award for Best Actor, for One Flew Over the Cuckoo's Nest and for As Good as It Gets. He also won the Academy Award for Best Supporting Actor for the 1983 film Terms of Endearment. Nicholson is well known for playing villainous roles, such as Frank Costello in The Departed, Jack Torrance in The Shining and the Joker in 1989's Batman. Notable films in which he has starred include Easy Rider, Five Easy Pieces, The Last Detail, Chinatown, The Passenger, The Shining, Reds, Wolf, A Few Good Men, The Pledge, About Schmidt, and The Departed.