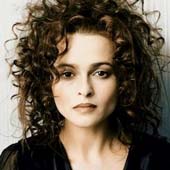 Helena Bonham Carter is an English actress. She made her acting debut in a television adaptation of K. M. Peyton's A Pattern of Roses before winning her first film role as the titular character in Lady Jane. She is known for her roles in films such as A Room with a View, Fight Club, The King's Speech, and playing the villainess Bellatrix Lestrange in the Harry Potter series, as well as for frequently collaborating with her domestic partner, director Tim Burton, in films such as Planet of the Apes, Big Fish, Corpse Bride, Charlie and the Chocolate Factory, Sweeney Todd: The Demon Barber of Fleet Street, Alice in Wonderland, and Dark Shadows. In 2012, she played Miss Havisham in Great Expectations, and Madame Thénardier in Les Misérables.