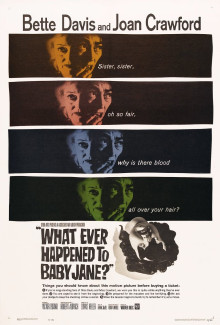 What Ever Happened to Baby Jane?

Sister, sister, oh so fair, why is there blood all over your hair?

Elderly sisters Blanche Hudson and Jane Hudson, who now live together in a house owned by Blanche, have each had their brush with fame. As a child, Jane, better known as Baby Jane, was a spoiled vaudeville star, doted on by their manager father to the exclusion of timid Blanche, who was hidden behind the scenes. As young adults, Blanche became a movie star, and used her fame and power at the studio to get Jane movie roles, much to the studio’s chagrin, they who felt Jane more a liability than asset. Blanche’s stardom continued until her “accident” which has left her wheelchair-bound and now largely dependent upon Jane for the most basic of needs. Blanche is enjoying a resurgence in popularity with her old movies being shown on television, which irks A-type Jane, whose celebrity is largely forgotten. As such, an angry Jane is in the process of trying to reestablish her career by resurrecting her Baby Jane act. To take Blanche down another notch, Jane also uses total control and other forms of psychological torture to torment Blanche, who feels largely helpless as she can’t get messages out of the house or receive incoming messages without Jane knowing or approving. Blanche believes Jane is emotionally disturbed and wants to drive her crazy, or worse kill her. The truth behind some long standing Hollywood gossip may be the tipping point in resolving the battle between the sisters, but not before some collateral damage.