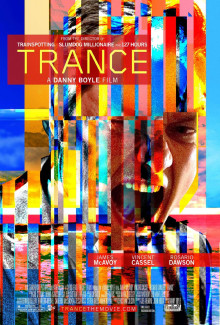 Simon (James McAvoy) works as an auctioneer at a specialist auction house for the invaluable works of art. In deal with the criminal group he was organized the theft of valuable Goya’s painting. Everything goes wrong when Simon during a robbery gets kick in the head due to which loses his memory and cannot remember where he hid the picture. How threats and torture did not give the result where the image is, the gang leader Franck (Vincent Cassel) sends Simon to Elizabeth (Rosario Dawson) which is specialist for hypnotherapy. Elizabeth through hypnosis should try back memories and find out the answer where the image is. The deeper Elizabeth enters in the mind of Simon, the boundary between hypnosis and reality gets blurred and the tension begins to grow.

Trance is, at moments, very interesting crime and psychological thriller, which is poor primarily due bad scenario and horrible rhythm.