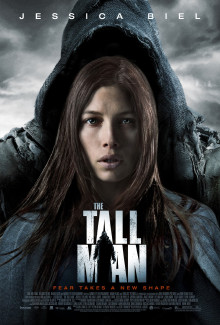 In once former prosperous town by the name Cold Rock, children have been kidnapped missing and disappear without a trace. Local residents suspect in man whom call “Tall Man”. Due to the number of children who are missing, “Tall Man” became a legend…

Julia Denning (Jessica Biel) is a local nurse in the city. Her late husband has left a deep mark as a doctor in the Cold Rock and she is now trying to be his worthy replacement. She is very skeptical about the “Tall Man” and tries to convince the local people that he doesn’t exist. One night will wake up and see that her little David is taken by a man dressed in black. Julia is ready to risk it all and will not rest until find her child.

Who is “Tall Man” and what is hiding behind the mysterious disappearances of children in the Cold Rock?

Tall Man is a very interesting movie with a good story about a small and isolated mining town that slowly dying out. The script was written well, although has a few flaws. The film contains elements of thriller and mystery as well as excellent twists.

Acting of all actors is on expected level and there are no complaints. This is one of best performance by Jessica Biel in career. Her acting is intense and totally dedicated. In addition to Jessica Biel and Jodelle Ferland is very well in the role of Jenny that played perfectly with a lot of talent.

The Tall Man is Directed by Pascal Laugier, which is known for the film Martyrs. Laugier has decided that, unlike the bloody horror as has been Martyrs, make a totally different movie with nothing less shocking story. He managed to create a great atmosphere with an even better environment, which this film raise to the next level. There are some shortcomings, but they are not as noticeable to influence the final impression.

Unlike most films that appeared in 2012, The Tall Man represent real refreshment because it is tense, unpredictable, interesting and sends viewers a very important social message.

Although often disputed, this movie definitely worth a look.