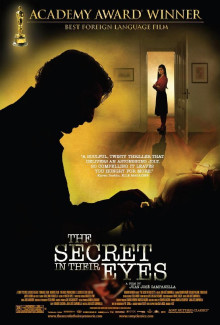 The Secret in Their Eyes (El secreto de sus ojos)

The retired justice officer Benjamín Espósito decides to write a novel based on the Morales Case of twenty-five years ago and has difficulties to find the right beginning. He visits his former chief Irene Menéndez-Hastings in the tribunal to show his draft. In the 70’s, Benjamín has an unrequited love for his new-hired chief Irene that belongs to an upper-class. Benjamin is assigned to investigate the murder of Liliana Coloto, a beautiful woman recently married with Ricardo Morales that had been brutally raped and murdered. Benjamin and his alcoholic partner Pablo Sandoval feel touched with the grief of Ricardo and go further in their investigation. Benjamin observes that a man named Isidoro Gómez is staring Liliana in many pictures and he becomes the prime-suspect. Meanwhile the tension between Ricardo and Irene increases along the days but Ricardo does not understand the signs of her eyes. Twenty five years later, Ricardo is still haunted by his love for Irene and for the unsatisfactory resolution of the Morales Case.