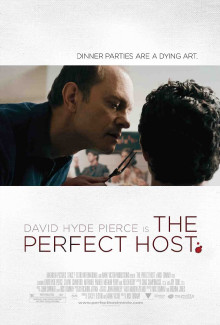 Make Sure He Doesn’t Serve You Your Last Supper.

A wanted criminal finds he’s the one in danger when he hides out in the house of a seemingly ordinary man in this thriller from Australian director Nick Tomnay. John Taylor (Clayne Crawford) is a thief who is having an especially bad day; he was part of a bank robbery that went spectacularly wrong, leaving him with a seriously injured foot and his description being broadcast by every news outlet in the city. John needs to get off the streets fast, so he stops at a nearby home and bluffs his way inside, telling the man of the house, Warwick Wilson (David Hyde Pierce), that he’s a friend of a friend and was told to drop by sometime. Warwick buys John’s story, and even invites him to stay for dinner, but before long John realizes he picked the wrong house to pull this scam. Warwick is a perfect gentleman on the outside, but inside he’s an angry and unstable person, and when he finds out that John isn’t an ordinary visitor, he’s in for a fight for his life. The Perfect Host was an official selection at the 2010 Sundance Film Festival.