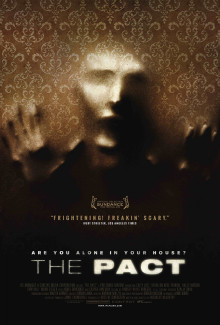 “Mom who’s that behind you?”

This is the sentence of little Eve, which is via the internet on a laptop saw someone behind Nichole. There is nothing behind, only on half open door of larder beyond which is not seen nothing but dark…

Nichole is one of the sisters who returned to his mother’s house in order to prepare everything for her funeral. Her sister Annie refuses to come and help her, due to the behavior of their mother in the past. Nichole and Annie don’t want to remember its childhood in which they experienced only torture. That night Annie was the last time heard with Nichole and from that point she disappeared without a trace. At funeral Annie meets with Liz, a friend of Nichole which keeps little Eve and invite them to go with her home to not be all night alone. During the night, strange things happen and Liz disappears while Annie succeeds to escape with Eva. The whole thing decides to report to the police but is it already too late? What’s going on in the house? Is it mother doesn’t want to leave her daughters on peace even after death?

The Pact is a film for those who like thrillers with elements of horror. Acting and screenplay are on solid level. The people in charge of the sound are done quite a nice job.

The acting is solid and the behavior of the leading actress in the film is what everyone expected from a person who found herself in that situation. It has a good story, contains a lot of creepy scenes and above all keeps attention the viewer throughout the whole duration.

This is the first film from writer-director Nicholas McCarthy who is in 2011 made a short film with the same title. It make a good choice when he’s decides to record full version.