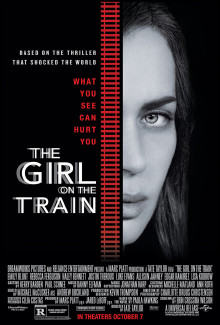 The Girl on the Train

What you can see can hurt you.

The divorcee Rachel Watson commutes every day to New York by train and watches the old house where she lived with her husband Tom Watson through the window. Rachel is an alcoholic and sterile woman that frequently has blackouts and shares an apartment with her friend Cathy. Tom is married with Anna Boyd with the baby Evie. Their babysitter is Megan Hipwell that lives with her husband Scott in the same neighborhood in the suburb. Rachel admires Megan and Scott since she believes they are the perfect couple. However Megan is a promiscuous woman that has affairs with many men including her psychiatrist Dr. Kamal Abdic. When Rachel sees Megan kissing another man on the balcony of her house, she decides to have a conversation with Megan after drinking in a bar. However she has a blackout and awakens with bruises in her apartment. Soon she learns that Megan is missing and Detective Riley that is in charge of the investigation visits Rachel to interrogate her since the neighbors had seen an alcoholic woman wandering in the area. However Rachel does not recall what she did that night. Rachel decides to investigate the case and has dreadful discoveries about her life and Tom. Who might be the killer?