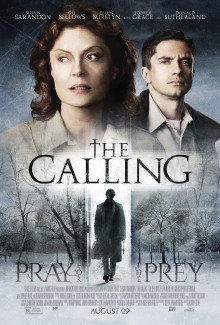 Pray for the Prey.

Inspector Hazel Micallef (Susan Sarandon), a police detective living with her mother Emily (Ellen Burstyn) in the small rural Ontario town of Fort Dundas, has her normally quiet routine interrupted when she is called to check in on elderly woman Delia Chandler and instead finds Chandler gruesomely murdered with her face moulded into an apparent open-mouthed scream. Informed by the local coroner that shaping the face would have required the killer to hold it in position for at least an hour post-mortem, Micallef begins to consider that she is dealing with more than a simple killing.

Working with fellow Fort Dundas detective Ray Green (Gil Bellows) and new officer Ben Wingate (Topher Grace), recently transferred from Toronto after the death of his life partner, Micallef uncovers a series of killings ranging from a neighbouring town to areas across Canada and attempts to stop the killer before he strikes again.