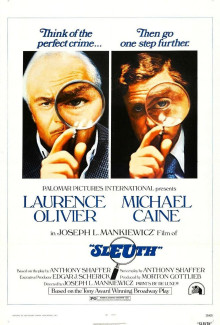 Think of the perfect crime… then go one step further.

The mystery stage play by Anthony Shaffer was adapted by the author into this stylish film from director Joseph L. Manciewicz. Laurence Olivier stars as Andrew Wyke, a best-selling author of detective fiction living in a grand 16th century mansion. Andrew is visited by Milo Tindle (Michael Caine), owner of a hair salon chain, and reveals to his guest that he’s aware of Milo’s affair with his wife Marguerite. Rather than being vengeful, however, Andrew professes he’s glad to be rid of his troublesome spouse. To avoid paying heavy alimony, Andrew suggests that Milo disguise himself as a clown and steal his wife’s expensive jewelry. That way Marguerite and Milo can obtain financial security while Andrew claims the loss on his insurance and all walk away rich. Andrew’s plan is a devious one, however, designed to toy with his wife’s lover, and a series of deceptions and counter-deceptions are launched in which nothing is as it seems, unfolding as an elaborate game of comeuppance between the two men. Ten years after Sleuth, Caine would assay a role not unlike Olivier’s in the similarly-themed Deathtrap (1982).