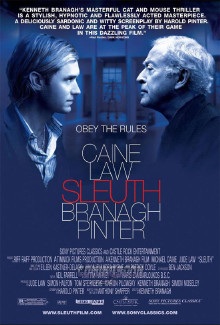 The Anthony Shaffer play originally brought to the screen in 1972 gets the remake treatment in this updating that finds Michael Caine stepping into the role of the brilliant thriller writer portrayed by Laurence Olivier in the original, and Jude Law following in Caine’s footsteps as the young hairdresser who steals the literary giant’s wife, only to find himself subsequently swallowed up in an elaborate revenge scheme. Kenneth Branagh directs a script adapted from Shaffer’s original play by screenwriter Harold Pinter.