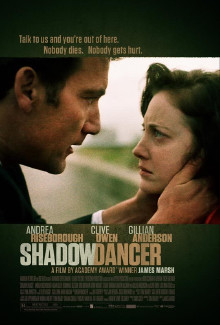 Belfast in 1993, the peace process in Northern Ireland is in full force. Colette McVeigh (Andrea Riseborough) is single mother and Catholic from Ulster, who lives in London. She is an active member of the IRA, arrested by the British secret service MI-5 after a failed bombing attempt in London. MI-5 Agent Mac (Clive Owen) offers her two options. One is to be arrested and lose custody of her son and the other to become an informant for MI-5. For Colette choice is not easy, because she will not spy some abstract organization, but hers own brothers and relatives who are all members of the IRA. Since her son for her the most important thing in the world, agrees to be an informant for MI5. Its mission is to follow her brother Gerry (Aidan Gillen) who is a high-ranking member of the IRA. Colette at the beginning works as a real agent of MI5, goes to Belfast and report what happens in her family, but things start to complicate when MI-5 decide to sacrifice informant. Mac must to take a huge risk in order to protect her…

Shadow Dancer is filmed by the novel of Thomas Brandby which is based on a true story. Director James Marsh has done a remarkable film that shows the fight between two secret organizations and their willingness to destroy everything in order to meet their objectives.