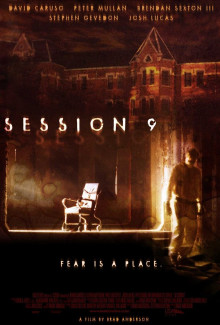 Fear Is A Place.

An asbestos abatement crew wins the bid for an abandoned insane asylum. What should be a straightforward, if rather rushed, job, is complicated by the personal histories of the crew. In particular, Hank is dating Phil’s old girlfriend, and Gordon’s new baby seems to be unnerving him more than should be expected. Things get more complicated as would-be lawyer Mike plays the tapes from a former patient with multiple personalities, including the mysterious Simon who does not appear until Session 9, and as Hank disappears after finding some old coins.