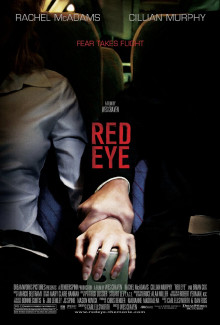 Terror rides the night skies in this thriller from horror auteur Wes Craven. Lisa Reisert (Rachel McAdams) is a young woman with more than her share of anxieties about flying. However, when circumstances demand she go to Miami, she gathers her nerves and books a seat on a late-night flight. Sitting next to her is a handsome and charming man named Jackson (Cillian Murphy), whom she already met in the airport, but once their jet is safely in the air, Lisa discovers he’s not the pleasant traveling companion she imagined. Jackson is part of a terrorist cell plotting to kill the head of Homeland Security, and he’s decided to draft Lisa into helping him. While Lisa has no interest in abetting Jackson’s plan, he soon reveals he’s holding a trump card — his compatriots are holding Lisa’s father hostage, and will kill him if she doesn’t cooperate. Red Eye was the first feature film credit for screenwriter Carl Ellsworth, who previously scripted episodes of Buffy the Vampire Slayer and Xena: Warrior Princess.