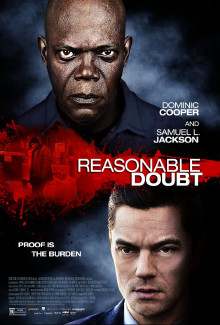 Proof is the burden

A hotshot district attorney finds himself at the mercy of a cunning serial killer in this twisting crime thriller starring Dominic Cooper and Samuel L. Jackson. Ambitious DA Mitch Brockden (Cooper) is on the fast track to success when, driving home one frigid winter night, he accidentally runs down a man who dashes into the street. In a panic, Brockden flees the scene. Meanwhile, accused criminal Clinton Davis (Jackson) faces 20 years to life after being found with the body. When the case goes to trial, Brockden’s nagging conscience drives him to acquit Davis, who has claimed innocence from the very beginning. But mounting evidence indicates that Davis may still harbor a dark secret, and when Brockden uncovers that secret he finds his life turned upside down, and his family in mortal danger.