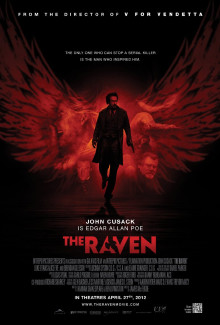 The only one who can stop a serial killer is the man who inspired him.

In 1848, in Baltimore, Edgar Allen Poe is a penniless writer with drinking problem, who writes reviews in the Baltimore Patriot newspaper. Emily Hamilton and he are in love but her father Captain Charles Hamilton despises him. When a mother and her twelve year-old daughter are mysteriously murdered in a locked room, the efficient Detective Emmett Fields finds a hidden spring in a window nailed shut that opens the window and he recalls an Allen Poe story. Then the writer Griswold that has criticized the stories of Poe is murdered in the same way of another gory story. They find a scarlet mask in Griswold and Poe recalls another tale about another murder in a ball. Fields believes that the killer has inspired in Edgar Aleen Poe’s tales to commit his crimes and that Emily is in danger. Captain Hamilton does not call off the party and the criminal creates a diversion to kidnap Emily. Now Poe must participate in a game following the killer’s instruction.