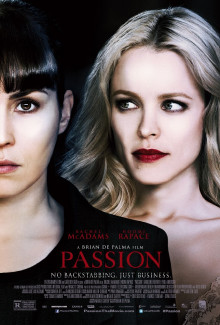 An intense power struggle between an icy advertising executive and her timid assistant turns deadly in director Brian De Palma’s stylish remake of Alain Corneau’s Love Crime (2010). A cultivated beauty with expensive tastes and a serious kinky streak, Christine (Rachel McAdams) holds a top office at one of the world’s biggest international advertising agencies. She didn’t get ahead by shrinking into the shadows, so when her coy but incredibly creative assistant Isabelle (Noomi Rapace) dreams up a wildly popular marketing campaign, Christine takes full credit for the idea. Simultaneously repulsed and intrigued by her boss’ shameless candor over the incident, Isabelle ignites an all-out war by sleeping with Christine’s lover. Later, when Christine turns up dead after humiliating her assistant in front of the entire company, the perceptive Inspector Bach (Rainer Bock) struggles to sort through the clues as Isabelle grows increasingly unstable and her story seems to change with each new interview.