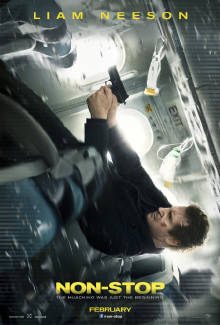 The Hijacking Was Just the Beginning

The alcoholic and discredited air marshal Bill Marks is a former cop that still grieves the death of his eight year-old daughter that died of leukemia. Bill is assigned to a flight from New York to London and the passenger Jen Summers sits on his side in the first-class. When the plane is crossing the Atlantic Ocean, Bill receives text messages telling him that one passenger will die every twenty minutes unless the TSA air flight company transfers 150 million dollars to an offshore account. Bill contacts his superior that does not believe in his words. Further they discover that the bank account is in the name of Bill. Now Bill has to find the terrorist with the support of Jen and the flight attendant Nancy only and soon he finds a bomb on board. But the TSA representative believes that Bill is the terrorist. Will he succeed in saving the passengers lives?