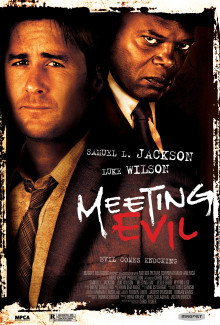 John Felton (Luke Wilson) is a real estate agent to whom recently going from bad to worse. Returning from work on Saturday, when he thought he could not be worse, at the door of the house will find foreclosure notice.

Although every day in the trash regularly throws various warnings about debts, he’s aware that foreclosure notice may mean an end to his hopes of finding a solution for the problems which are accumulating.

At home, his family prepared birthday surprise, which failed to cheer him up. The tension in his marriage with Joanie (Leslie Bibb) exists for some time because he had committed adultery. Although for a long time are not on the best relations Joanie and John are trying to hide their disagreement in front of children. Shortly after Joanie take children to the park and John remain alone in the backyard, someone will knock on the door. The man at the door will be present himself as Richie (Samuel L. Jackson) and ask  John for help to push car who are suddenly stopped in front of his door.  Is it Richie man who can help John to forget his problems?

This film was not screened in cinemas, has great main actors and directed by Chris Fisher who is known by the title S. Darko, successor of Donnie Darko who is totally failed. Meeting Evil is unfortunately another film of this director that will be quickly forgotten.

The script is incomplete and confusing with a lot of strange and illogical decisions. Director failed to fit all scenes and editing in some moments seemed as amateurish, while the music is totally missed the genre of the movie.

Meeting Evil is a film that is not too bad, but not great neither. If you have excess time you can look this film but if you don’t, don’t worry, you will not miss anything important.