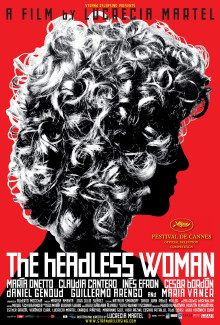 Acclaimed Argentinean filmmaker Lucrecia Martel steps back behind the camera for her third feature film with this tense thriller concerning a woman who fails to recognize the people surrounding her as well as their intentions after inadvertently killing a dog while driving on the highway. Budgeted at two million dollars, The Headless Woman marks the second collaboration between Agustín Almodóvar’s El Deseo production company and Buenos Aires-based outfit Lita Stantic – who had previously teamed to produce the celebrated Cannes Film Festival hit The Holy Girl.