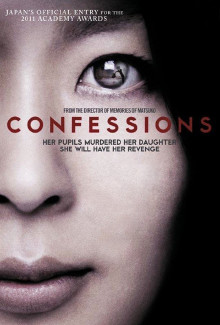 Her pupils murdered her daughter. She will have her revenge.

Yuko Moriguchi is a middle-school teacher whose four-year-old daughter is found dead. Shattered, she finally returns to her classroom only to become convinced that two of her students were responsible for her daughter’s murder. No one believes her, and she may very well be wrong, but she decides, nevertheless, that it’s time to take her revenge. What happens next is all-out psychological warfare waged against her students in an attempt to force them into confessing what she knows in her heart to be true: they are guilty and must be punished.