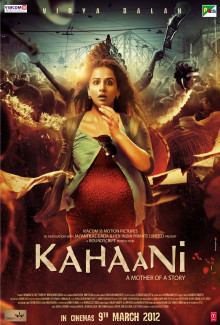 A mother of a story

Vidya Bagchi (Vidya Balan) arrives from London to Kolkata, where preparations for the annual Durga Puja festival coming to an end. Seven months pregnant and alone, she will unlike other people who arrive in the festival city go straight to the police station instead of searching for a hotel. The reason for visiting police station is report for missing person. It’s about her husband Arnab Bagchi (Indraneil Sengupta) with whom she has lost all contact.

About a month ago, Arnab Bagchi arrived in Calcutta because he had a two-week contract with National Data Center. The first two weeks Arnab and Vidya were heard every day, however, after that there was no calls and messages from Arnab, so she decided to come directly in Kolkata and investigate what happened with her husband.

Vidya will begin her search on places where Arnab lived and worked. All her attempts to come up with some information will be useless because everyone will try to convince her that such a person does not exist. Soon she will realize that nothing in this place is not what it seems, and no one wants to tell her the truth. But Vidya will not give up, in a city filled with lies she is determined to uncover the truth about her husband, even at the cost of life.

Kahaani is suspense thriller which represents an excellent combination of directing, screenplay and aesthetics that will not leave you indifferent. This Indian movie will keep you clutched to your seat all time and would leave you keep guessing what is going on and what would happen next.

Acting is excellent. Vidya Balan Takes Kahaani to another level. One very difficult screenplay is with her acting turned into something that could be described as perfect. She definitely is one of the most talented actresses in Bollywood.

Music of the film is good and contains two songs “Ekla Chalo Re” and “Ami Shott Bolchi”.

Kahaani is evidence that when story, acting and editing are good, film cannot be bad. The quality of this film is confirmed by numerous awards.