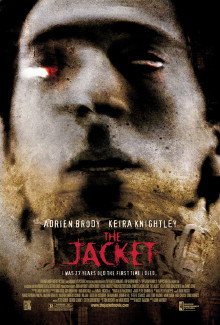 When you die, all you want to do is come back.

In 1991, in Iraq, the military Jack Starks is shot in the head and presumed dead. When he blinks his eyes in the morgue, the doctor is called. One year later, after being discharged from the army, while hitchhiking in a road in Vermont having amnesia problem, he helps a drunken woman, Jean Price, and her daughter, Jackie Price, fixing their car. Later, he gets a lift, but the driver is stopped by the police and kills the policeman with three shots. Jack is also shot in the head and incriminated by the real killer, who leaves his gun close to the fainted Jack. He goes to court and is sentenced to the mental institution Alpine Grove for insane criminals. Jack becomes the experiment of Dr. Thomas Becker, who drugs and dresses him with a jacket and lock him in a drawer for corpses in the morgue. While locked, Jack travels to 2007, where he meets a grown-up Jackie Price and they fall in love for each other. Jack envisions that the only exit from the institution is though the jacket.