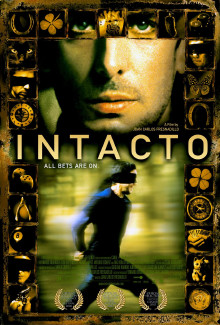 All bets are on.

Some people are born with good luck, but others try to attain it however they can — and at any cost — in this offbeat psychological thriller from Spain. Samuel Berg (Max Von Sydow) is an elderly man who lives beneath a gambling casino on an island off the Spanish coast. In Berg’s world, good fortune is a commodity that can be acquired from others, and while would-be gambler Federico (Eusebio Poncela) has a genuine talent for taking good luck from those who have it, Berg’s gift is even stronger, and after a long day of absorbing positive vibrations from winning gamblers, Berg steals the day’s “take” from him, leaving Federico to plan his revenge. Federico becomes aware of Tomas (Leonardo Sbaraglia), a man who recently survived a plane crash, and is convinced he has even more luck than Berg can overcome; the two become partners, and Federico enters Tomas in an underground tournament designed to determine who Lady Luck smiles upon most sweetly. After Federico and Tomas win a handsome home from Alejandro (Antonio Dechent), a former bullfighter, the pair seems poised to go up against Berg and claim his luck as their own, but Sara (Monica Lopez), a police investigator, is convinced Federico and Tomas are up to no good and begins exploring their bizarre secret world. Intacto received its American premiere at the 2002 Sundance Film Festival.