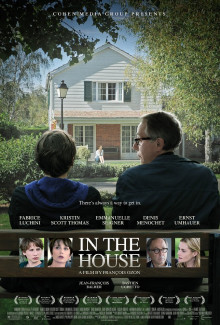 In the House (Dans la maison)

There’s always a way in.

Germain (Fabrice Luchini) is a French teacher in high school who is very disappointed by lack of interest of students for literature and writing. Reading essay of Claude Garcia (Ernst Umhauer) remains impressed by his way of writing. Content of essay reads with his wife Jeanne Germain (Kristin Scott Thomas), in which Claude describes his friend Rapha (Bastien Ughetto).  Germain who yearns to become a good writer, helps and motivates Claude in further writing. How would two friends spending more time together Geramin proposes that Claude helps Rapha in mathematics. In this way, Claude meets Rapha’s parents and in them recognizes the family which he never had. He begins to spend more time with them and write about his observations. In each new text Claude describes details from the life of Rapha’s family and every text ends with the words ˝to be continued˝. Because of these stories, Germain will soon run into problems that would change his life.

French director and screenwriter François Ozon is inspiration for the film found in a theater play by Spanish playwright Juan Mayorga “El chico de la ultima fila” (The Boy in the Last Row) . For the film “In the House” Ozon has been awarded with “The Golden Shell” for the best film at the San Sebastian International Film Festival and received Jury Prize for Best Screenplay.

A story about a professor of literature and his talented student is also the story of the art of telling a story, which as and in real life can slip into the drama or comedy.