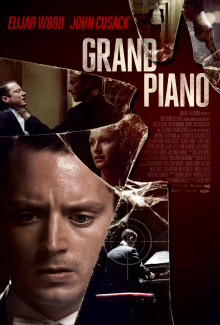 Eugenio Mira’s thriller Grand Piano centers on Tom Selznick (Elijah Wood), a famous concert pianist who hasn’t played in public in five years – he had a meltdown during his last performance while trying to tackle an allegedly impossible piece, which was composed by his eccentric mentor Godureaux. Now he’s about to reenter the limelight with a high-profile concert, his movie-star wife (Kerry Bishé) watching him from the balcony, and every person he encounters wants to know if he’s afraid of choking (we’re thankfully spared the scene where Tom runs into someone viewing his past failure on YouTube, which has become the hack screenwriter’s shorthand for “public humiliation”). An already nerve-racking challenge is made surreally worse when, while on-stage, Tom realizes that his sheet music is covered with threatening messages, stating that if he misses one note he’ll be killed. Soon he’s communicating via earpiece with an unseen madman with a sniper rifle, who tells him that he must attempt the impossible piece again or he and his wife are dead.