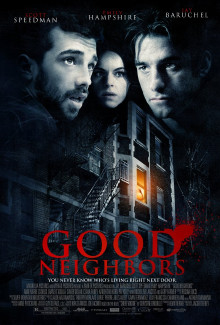 In Notre-Dame-de-Grâce a.k.a. NDG, a residential neighborhood of Montreal, a serial-killer has raped and murdered three victims. In an old apartment building, the new tenant of the fourth floor Victor has just arrived from China with his cat Balthazar and befriends the waitress of a Chinese restaurant Louise that lives on the second floor with her two beloved cats Mozart and Tia Maria and the handicap Spencer that is in a wheelchair and lives on the first floor. Louise is on edge with the news about the murders in her neighborhood and Victor, who is an elementary school teacher, brings her home everyday after the working period and falls in love with her. Meanwhile, their alcoholic neighbor Valérie Langlois hates Louise’s cats and on the Christmas night, she poisons the pets. Louise decides to revenge against Valerie simulating an attack of the serial-killer. But when she is returning home, she meets the real killer and Victor also sees him. When the police detective and the smart Behavioral Psychologist Roland Brandt arrive in the building to investigate, all the three neighbors become suspects.