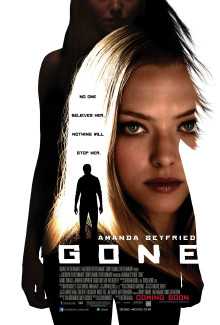 No one believes her. Nothing will stop her.

Jill (Amanda Seyfried) lives unassuming life with his sister Molly (Emily Wickersham). A year ago, Jill was the victim of abduction from which she managed to save herself. Today still feels the consequences of that kidnapping.

One morning upon return from the night shift will not find sister in the house. Earrings on the floor, untouched clothes and missing images from the lexicon are just some of the things because of which Jill thinks that Moly is kidnapped. Convinced that her sister is kidnapped by the same kidnapper who abducted her, Jill goes to the police, however, no one believes in her story because of her previous mental state through which she passed when her parents died and abduction for which they think that is fictional. Peter Hood is the only detective who promised that will pay attention to her case. As time goes by, Jill will become more and more nervous while police will be monitoring all her moves.

Is it Jill ready to once again meet her captor and solve her problems once and for all?

Gone is a solid movie that had a lot of potential, which unfortunately has not been fully utilized.

The scenario is not at the expected level. Obviously there was a desire that film be interesting to viewers during the entire duration and because of that writer has placed a lot of false guidance and possible suspects that affect the quality of the story. Besides that, totally is forgotten the development of other characters in the film.

Director Heitor Dhalia has done quite a good job. He managed in an excellent way to convey the atmosphere and make some great scenes.

The main character and person around which are happening all the things is Jill played by Amanda Seyfried. This is one of her strongest roles. Throughout the film, her character will be found in the role of a scared, confused and determined person. All transformation in its role Amanda plays great and above all natural.  She is definitely the brightest point of this film.

Although not fully met expectations and has several crucial mistakes, Gone is a film that needs to get chance. Recommendation!