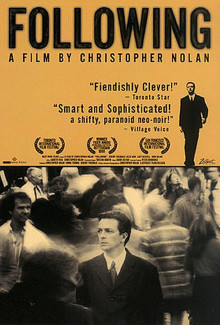 The protagonist of Following is Bill. Bill is an unemployed aspiring writer who lives a solitary and boring life in London, England. Bill has a fascination with people, and with hopes of finding material to write about, begins to pick individuals out of a crowd, and to follow them. Bill establishes rules to keep him out of trouble and to keep his ‘following’ random, but soon enough he breaks one of his rules by following someone more than once. The character he follows on numerous occasions first is Cobb. Cobb a confident and intelligent burglar catches Bill spying on him and soon involves Bill in his peculiar burglaries. Similar to Bill’s interest in following, Cobb has a great interest in the individuals he is stealing from. During the robbery of a residence Bill becomes interested in the woman who owns the flat, so he begins to follow her. Eventually he decides to meet her and they begin seeing each other. This upsets Cobb as he also learns the woman has asked Bill to do a job for her. But things are not as they seem, and soon Bill will find out why.