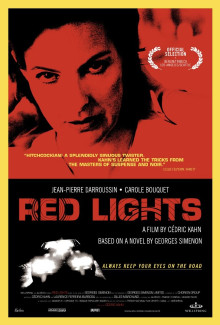 Always keep your eyes on the road.

A couple’s marital woes lead to a terrifying ordeal in director Cédric Kahn’s Red Lights. Co-written by Gilles Marchand (Who Killed Bambi?) and Kahn’s frequent writing partner Laurence Ferreira Barbosa, Red Lights is based on a novel by Georges Simenon. In the film, Antoine (Jean-Pierre Darroussin) seems to be looking forward to taking his wife, Hélène (Carole Bouquet), for a long drive. The plan is to leave Paris and pick up their children at camp that evening, then spend a couple of weeks in the country relaxing. But when Hélène keeps him waiting, Antoine begins to drink. After several beers and a scotch, the couple hit the road, and immediately run into traffic leaving the city. Antoine has been hearing stories of horrible accidents on the road all evening, but that doesn’t stop him from driving like a madman. When Hélène complains about his erratic driving, things just get worse. When they’re not bickering, they’re glaring silently out at the dark road. Eventually, Antoine decides to pull over for another drink, and when Hélène threatens to take the car and continue on without him, he takes the keys with him into the bar. When he gets out, he finds that Hélène has gone, leaving a note on the car saying she’s continuing on by train. Antoine races to the train station, but he’s too late, so he wanders into a nearby bar. There, he buys a drink for a sullen young man (Vincent Deniard), who later approaches him in the parking lot, asking for a ride. The two soon come to a police roadblock, and Antoine begins to suspect that his traveling companion is the escaped fugitive for whom the cops are looking. Red Lights had its U.S. premiere at the 2004 Tribeca Film Festival.