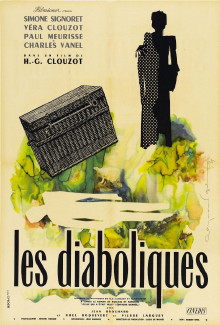 See it, be amazed at it, but… BE QUIET ABOUT IT!

Married Michel and Christina Delassalle are the headmaster and headmistress respectively of Institution Delassalle, a second rate boys boarding school in St. Cloud, outside of Paris. Although Christina officially owns it – she bringing it into their marriage as part of her dowry – Michel effectively makes all the decisions, partly because he wants to show everyone involved that he is in control as the man, and as Christina is a frail woman with a delicate constitution, the primary problem being a weak heart. Their marriage has long been over because of Michel’s brutish behavior toward her, although Christina, a devout Catholic, refuses to get a divorce. Michel has openly been having an affair with Nicole Horner, one of the teachers at the school. But even now their relationship is on the rocks as Michel beats her. Nicole convinces Christina that their collective problems can all be solved if they kill Michel. Nicole hatches an elaborate plan to take place over a long weekend: she and Christina will drive down to her house in Niort for the weekend, while Michel is stuck at the school; Christina will make up some ruse for Michel to come to Niort; they will drug and then drown him in Nicole’s bathtub; they will then transport the body back to the school before the end of the weekend, dumping the body into the school’s murky outdoor pool; the dead body will eventually rise to the surface and thus be discovered. With the successful execution of the plan, Nicole and Christina will have an alibi of being away for the weekend when he would have died by accidentally drowning in the pool. With a few required modifications and a few hiccups along the way, the latter largely due to Christina often losing her nerve, they are able to carry out the plan successfully… or so they believe. However, the body never materializes in the pool, even after the pool is emptied on a pretense. Other strange things happen with regard to a missing Michel which belie what Nicole and Christina believe to be reality. Did someone discover what they did, take the body and will eventually try to blackmail them? Is Michel still alive and just playing with them? Are their minds playing tricks on them? Or is there another reason they just have not thought about as a possibility?