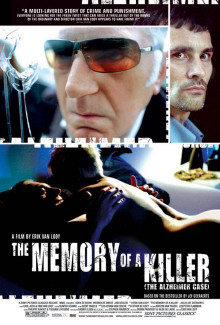 The Memory of a Killer (De zaak Alzheimer)

A career criminal struggles to perform an act of street justice as he loses control of his faculties in this thriller from Belgium. Angelo Ledda (Jan Decleir) is a veteran hitman who has spent most of his life as a hired killer. Angelo decides to get out of the business when he finds he’s losing his memory due to the early stages of Alzheimer’s disease, but he’s been offered a lucrative final assignment that involves murdering two people. Angelo initially says yes to the job, until he finds out one of his targets will be a 13-year-old girl; it goes against Angelo’s principles to kill a child, and he decides not to take the assignment. However, Angelo quickly discovers his customers found someone with no such scruples; angry, he seeks vengeance against the man who would kill a young girl, and as he shoots his way through the chain of command that led to the murder, he makes the troubling discovery that the crime is tied to a cadre of powerful figures in business and politics. As Angelo struggles against his failing memory to find out who had final responsibility for the hit and why they ordered it, a pair of police detectives, Vincke (Koen de Bouw) and Verstuyft (Jan Decleir), is trying to find the link between the murders of a growing number of prominent citizens. The Memory of a Killer as initially screened in Belgium as De Zaak Alzheimer, or The Alzheimer Case.