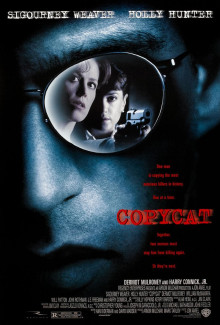 One man is copying the most notorious killers in history one at a time. Together, two women must stop him from killing again. Or they’re next.

Dr. Helen Hudson (Sigourney Weaver), a psychiatrist famous for her writings about serial murderers, is nearly killed by obsessed psychopath Daryll Lee Cullum (Harry Connick Jr.). As a result of this trauma, Helen becomes a drunken, pill-taking agoraphobic who can’t leave her San Francisco apartment. After a series of bizarre murders, she calls the police suggesting that the murders were the work of a serial killer. Detective M.J. Monahan (Holly Hunter) and her assistant Ruben (Dermot Mulroney) believe Helen and discover, during the investigation, that the man is re-creating murders by the killers described in Helen’s book: The Boston Strangler, Ted Bundy, Son of Sam and the Hillside Strangler. After Helen’s secretary, Andy (John Rothmen) is murdered, Helen begins to fear for her own life. The film has a dramatic, terrifying conclusion as Helen confronts the killer and must overcome her own fears to save herself.