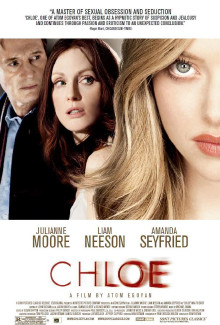 If the one you love was lying to you, how far would you go to find out the truth?

An untrusting wife attempts to prove that her husband is cheating by hiring an escort to seduce him, inadvertently endangering her entire family in the process. Catherine (Julianne Moore) is a respected doctor, and her husband, David (Liam Neeson), is a dedicated music professor. They’ve been married for years and have a teenage son together, but lately the passion has faded from their romance. The morning after David misses his flight home — and the elaborate surprise birthday party Catherine had planned to celebrate his return — Catherine finds a text message on his phone that leads her to believe her husband is sleeping with a female student. Her suspicions grow over the following weeks, and when Catherine has a run-in with an escort named Chloe (Amanda Seyfried), she hires the ravishing blonde to test her husband’s fidelity. After each encounter with David, Chloe reports back to Catherine with all the sordid details. But the further the experiment goes, the less clear Chloe’s motivations for taking part in it become, and the more the untrusting wife begins to fear that the situation has spiraled out of control. Directed by Atom Egoyan (The Sweet Hereafter, Ararat), this erotic thriller is a remake of Anne Fontaine’s French film Nathalie…, and was adapted by Erin Cressida Wilson.