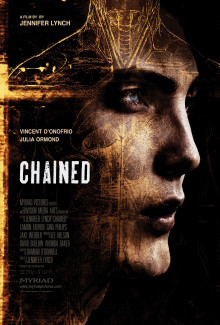 Returning home from the cinema, a young Tim (Evan Bird) and his mother Sarah (Julia Ormond) are decide to get into a taxi. Did not even consider that this will be their last ride together…

Taxi driver is a psychopath Bob (Vincent D’Onofrio) who kidnaps them and brutally kills Sarah. Young Tim remains as his protégé, following the rules for further life with him, which includes cleaning of the mess that he leaves after each of his murder. After attempt of escape Bob changes its name into Rabbit and puts him in chains of sufficient length to be able to move around the house. As the years passed and Bunny became a teenager, Bob has begun to teach him about human anatomy and psychology, wanting him to be his successor. Every day Bob was coming with different women, wanting to see his reaction. Rabbit will soon have to decide whether to go follow the footsteps of Bob as a serial killer or will try one more time to escape…

Chained is very disturbing and difficult film to watch. Just the thought of growing up indoors with a psychopath, who constantly abusing unknown women is frightening.

Important contribution to overall impression gave Vincent D’Onofrio who played a great role as a serial killer. His acting, cold facial expressions and speech are simply terrifying, which makes this title even more daunting for watching.
On the other hand, Eamon Farren starring helpless Tim or later Rabbit which after so many years of incarceration, succumbed to Stockholm syndrome and admitted defeat. Not wishing to enter in open conflict, he accepts everything ordered by Bob with minimal deprecation.
The atmosphere during the entire duration of the film and the script are good, although screenplay contains minor flaws.
Jennifer Chambers Lynch has done a good job. Obviously, is that are fully recover from the failure that is experienced in his debut with the movie “Boxing Helena.” Chained is definitely the best achievement for her so far, with whom she went out of his father’s shadow.

Brilliant acting, a good script and creepy atmosphere are the things why you should watch this movie.