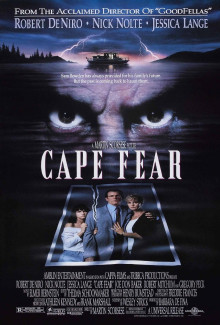 There is nothing in the dark that isn’t there in the light. Except fear.

Sam Bowden is a womanizing lawyer who has cheated on his burnt out, bitter wife Leigh Bowden. Sam, Leigh, and their 15 year old daughter Danielle have moved to a backwater Florida town for a new start, but Sam is already showing signs of fooling around with his clerk, 16 year old Lori Davis. Meanwhile, Leigh broods at home, venting her bitterness on Danielle. But Sam’s unfaithfulness becomes the least of Leigh’s worries. Years ago, as a public defender, Sam had a client named Max Cady, who was accused of brutalizing a teenage girl. Sam put up a lousy defense for Max after discovering that Max was guilty of brutalizing the girl. Now, 14 years later, Cady has been released from prison and he’s hungry for revenge on Sam, having spent his sentence making himself well-read in philosophy and literature. Cady’s plan is to destroy Sam’s career and family. Cady fatally poisons the family dog, brutalizes Lori, and comes close to getting Danielle to sympathize with him, successfully goading Sam into violence. Sam has Lieutenant Eigert, of the local police department, try to harass Cady into leaving town, hires sleazy private eye Claude Kersek to have Cady beaten up, and offers Cady money to simply go away. When all that fails, Sam uses his family as bait to lure Cady into his house while Kersek is guarding the place. It ends up as a bloody mess when Cady sneaks in and kills Kersek. This prompts the Bowdens to leave the house, with Cady following them all the way to the Bowden houseboat for a confrontation on the Cape Fear River in North Carolina.