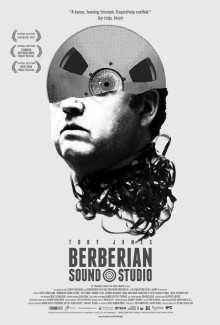 The fragile psyche of a respected British sound engineer starts to crack when he goes to work on a gruesome Italian horror film. A veteran of nature documentaries, talented engineer Gilderoy (Toby Jones) accepts a job working on boisterous Italian horror auteur Gianfranco Santini’s (Antonio Mancino) “The Equestrian Vortex,” but finds the gruesome subject matter becoming too much to take as he’s barraged with a series of horrifying images. Later, as the sound crew strives to produce Foley effects with real impact, Gilderoy begins to feel as if the nightmares that haunt him in his sleep have managed to invade his waking hours as well.