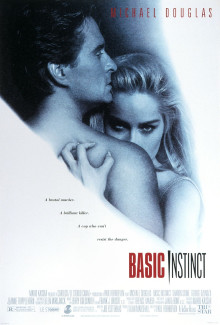 A brutal murder. A brilliant killer. A cop who can’t resist the danger.

Former rock star and San Francisco nightclub owner Johnny Boz is found murdered in his bed. Detective Nick Curran is assigned to the case; he has a history of alcoholism and drug abuse although he is clean now. The prime suspect is Catherine Tramell, an attractive and manipulative novelist who had been seeing Boz for a while. Police psychiatrist Beth Gardner (who happens to be Nick’s ex-girlfriend) is brought in on the case when it is discovered that Boz’s murder was copied directly from one of Catherine’s novels. Nick starts to get too involved and everyone seems to be a suspect.