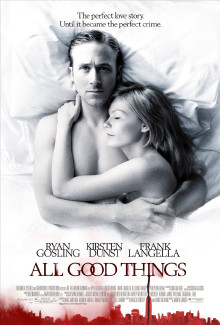 The perfect love story. Until it became the perfect crime.

David Marks is the eldest of the third generation of the New York Marks real estate moguls, they who are in the top five of all New York City landowners, primarily of tenements and commercial properties renting to what would be considered seedy shops. David never had any desire to enter into the family business, which was run during the late twentieth century by his long widowed father, the cutthroat Sanford Marks, with who he had a detached relationship. In November 2003, David is testifying at a trial, where one of the attorneys, Richard Panatierre, is questioning him primarily about his life with his wife, Katie Marks née McCarthy, who he met in January 1971 when she was a tenant in one of the Marks owned buildings. Sanford never approved of Katie because of her working class status. Shortly after they got married, David and Katie moved to Vermont to open a health food store, although their life was subsidized by Sanford. Sanford was able to convince David to move his family back to New York City and to accept a job in the family business doing work which Katie would probably not agree with if she knew its nature. As David got immersed in this work, his mood and behavior changed drastically to a point where Katie no longer saw in him the man she married, although she tried to stand by him even through these difficulties. But their lives began to drift apart. As Panatierre continues his questioning to its conclusion with David, the true nature of the trial and the reasoning for the questions about Katie come to light. The trial would not have have occurred without the direct or indirect involvement of among others David’s longtime friend, writer Deborah Lehrman, an ambitious new New York District Attorney named Janice Rizzo, and a more recent Galveston based friend of David’s named Malvern Bump.