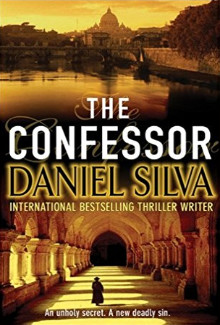 The Confessor is a amazing thriller about one ancient and one present betrayal, that takes place simultaneously at three locations in Munich, Venice and Vatican, with the three men which connects same fate.

Munich: The writer Benjamin Stern in his apartment finds a man, who browses his notes and asked him: “Who the hell are you?” Instead response, man kills him. While Stern lies in deathly grip of repression, the killer mumbles a few words of Latin, takes the writer’s papers and leaves.

Venice: Restorer of paintings Gabriel Alon carefully applied some color on Bellini’s act, and then he saw a boy who brings him a piece of paper. Knows that is something about Stern. They will want to he immediately went. He been sighed, Mossad agent completes the job, and packed brushes.

Vatican: Papa known as Paul Seventh – “Papa Accidental”, as him is called by his opponents – walk in the garden and think about what he knows and how much the enemy will gain. He believed that understood why him was God chosen for this work, but him expects a difficult and extremely dangerous road. If be successful, church will be fundamentally change. If fails, he will maybe destroy her – and himself.

The following weeks, roads of all these men will be interbreed on the trail of long buried secrets and unimaginable acts what will each of them change forever. Intrigue will dominate their lives, the death them lurking, and at everything will fall the shadow of the Confessor.

Overflowing with sumptuous characters, exceptionally narrated, tangles action which abounding with surprises and intensity, this represent a unusually strong work from new master of the genre.

The Confessor, a book that keeps your attention to the end and irresistibly pulls you to next chapter. The tense and carefully assembled political thriller with unexpected twists and interesting characters. A book that takes you through the whole world, full of interesting characters who are faithfully and completely displayed. Conspiracy that slowly rise to the surface, and despite the great aspirations of secret societies and various powerful people who go by the principle of Machiavelli’s “The aim is not elected by the means.” Otherwise, this is the third book in the series about Gabriel Allon, the restorer of paintings and Israeli agents. Daniel Silva manages what many did not succeed – that with each book surpass the previous one, both in terms of writing, so and when it comes to plot and tension.

For all those who love stories about the Vatican, Jews and the mysteries of the Second World War, which haunt us to this day. A great thriller!