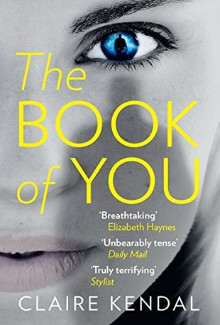 The Book of You

His name is Rafe, and he is everywhere Clarissa turns. At the university where she works. Her favorite sewing shop. The train station. Outside her apartment. His messages choke her voice mail; his gifts litter her mailbox. Since that one regrettable night, his obsession with her has grown, becoming more terrifying with each passing day. And as Rafe has made clear, he will never let her go.

Clarissa’s only escape from this harrowing nightmare is inside a courtroom—where she is a juror on a trial involving a victim whose experiences eerily parallel her own. There she finds some peace and even makes new friends, including an attractive widower named Robert, whose caring attentions make her feel desired and safe. But as a disturbingly violent crime unfolds in the courtroom, Clarissa realizes that to survive she must expose Rafe herself. Conceiving a plan, she begins collecting the evidence of Rafe’s madness to use against him—a record of terror that will force her to relive every excruciating moment she desperately wants to forget. Proof that will reveal the twisted, macabre fairy tale that Rafe has spun around them . . . with an ending more horrifying than her darkest fears.

Masterfully constructed, filled with exquisite tension and a pervasive sense of menace, The Book of You explores the lines between love and compulsion, fantasy and reality, and offers a heart-stopping portrait of a woman determined to survive. Claire Kendal’s extraordinary debut will haunt readers long after it reaches its terrifying, breathtaking conclusion.