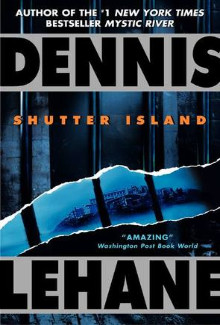 They say, get over it, you have to get over it, but what will happen and when it get over? I will live this fucking life? How to get you out from my head? So far, nothing did not work, so how can I do that? How can I let you go, that’s all I ask. I want you back here in my arms, to feel your smell, and so, though, I just want you to disappear. Please, please, disappear…

Year 1954. FBI detective Edward “Teddy” Daniels and his new partner Chuck Aule are coming to Shutter Island. At place where are in Ashecliffe hospital accommodated deranged and violent criminals in order to investigate the disappearance of a patient. Multiple murderer Rachel Solando is free somewhere on this remote and isolated island, although she was guarded in a locked cell under constant surveillance.

The devastating hurricane cuts off the island from the world while doctors, investigators and shaken patients or prisoners placed in claustrophobic chamber of fear and uncertainty. Terrifying medical experiments, radical therapy and terrible surgery outputs to the surface in a nightmarish maelstrom that folds around FBI agents.

No one will escape unharmed from the Shutter island because nothing in Ashecliffe Hospital not is what it seems. But is not neither Teddy Daniels.

Novel Shutter Island is a psychological thriller who will you with each next page drawn into the tangle of mysterious circumstances and penetrates deeper into the human psyche, leaving you at the end to think who is crazy here? And what is in fact true?

Dennis Lehane is well written this book, and especially the character of the protagonist Teddy Daniels, a war veteran and a widower whom tortured memories scenes of the liberation of Dachau inmates and those of the deceased wife. Angry on one of the doctors because of German origin and on one of the patients from hospital which is responsible for the death of his wife. His fight begins with himself and turns into a quest for knowledge and discovery of the real truth, primarily what is happening on the island and why it is all around him weird. In this way, the author introduces the reader that along with Daniels discovers the truth about a paranoid environment where nothing is as it seems.

Shutter Island will take you on an incredible ride of human mind. Will wake your “little gray cells” and force you to think. Definitely a book that deserves to be read, especially if you’re a fan of psychological thrillers.

Based on the novel Shutter Island is filmed a film with same title in 2010, directed by Martin Scorsese, with Leonardo DiCaprio in the lead role. It does not matter whether will you first read a book or watch a movie, the differences between them are minimal because the film completely follow the story from book .