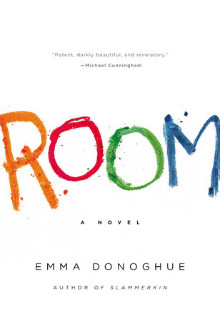 In the room I was safe, Outside is terrible.

For five year old boy Jack, room is the entire world. There is born and there he and his mother eat, sleep, play and learn. There are endless wonders that flare up Jack’s imagination – the snake under the bed, which is made of eggs husk, a fictional world that reach out through TV, comfortable closet under the mother’s clothing where she puts him every night, in case that old Nick comes.

Room is home for Jack, but for his mother is dungeon in which she resides since his nineteenth, whole seven years. Led by great love toward son, she created him a entire life in an area of nine square meters. But Jack’s curiosity grows along with her desperation, she knows that room not long be able to restrain the two of them. Looking for a way to get out into the outside world. Will be content with what awaits them outside when they leave the room…

Told by unusual and humorous Jack voice, room is the story of the unstoppable love under terrible circumstances and about unbreakable bond between a mother and her child. This is shocking, thrilling and upsetting novel but deeply humane and truly touching. Room is a novel that you will never forget.

This story is told by voice of five year old boy Jack, captured in the room, along with her mother. That room is their world, their home, their life. They have developed a special connection, understand, respect each other and talk about everything. Jack was not dissatisfied, here was born and he did not know for better. But even though he was afraid of the outside world, he was agreed to help mother to liberate. She wanted more for herself and for her son… And then came new traumas. They need to learn to live in this world where people do not have time for each other, do not listen what other say and want, where each living in its microcosm. Jack will good cope and in such circumstances, his mother little harder, but what will never change is a deep connection between mother and son created in inhumane conditions. The overwhelming emotional story which everyone should read, to understand how little it takes to make a man happy…

Motherhood is the most powerful feeling that a woman can experience. Fascinating how the mother to the smallest details prepared his son for the world, called “Outside.” This novel proves the truth of the saying: “God could not achieve everything, because he created the mother.” Very powerful, moving, unpredictable and heavy psychological story from the perspective of readers.