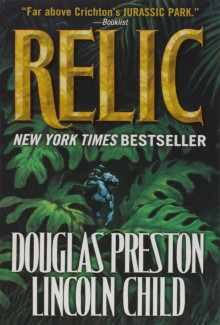 Only a few days before the opening of the exhibition ˝Superstition˝ in the popular New York Museum of Natural History, several visitors are brutally murdered in a dark hallway and sheltered in the hidden rooms of the Museum. Autopsies indicate that the killer can not be a human being… But the director of the museum still plans to proceed with preparations for the grand opening despite the cruel killings.

The first evidence puts the blame on crates that arrived from Brazil a few years ago, from the expedition that disappeared in the Amazon basin while searching for the lost tribes Kotoga. According to local legend, the tribe Kotoga was secretive group, such as a cult of diviners, who were able to control demons. Is it behind the killing Mbwun, in translation ˝ He Who Walks On All Fours ˝ – creature in the form of a possessed lizard God, created by the demon that is similar to Satan, a which tribe Kotoga used in retaliation for the killings. Is there anything else in crates with a relic that depicting Mbwun in the form of figures, which will be first shown at the upcoming exhibition and what is it actually?

Above all, it seems that several managers knew about the previous killings that took place at the Museum but they decided to keep that confidential, so as not damage the reputation of the museum.

One of the scientists employed at the Museum, Margo Green must find out who or what killed these people. Will it be able to prevent a massacre?…

The terrible story … Fans of thrillers could not wish eerie atmosphere… story set in the scariest building in the world, where there is no room for hypersensitive.

The museum is described so authentic that even though you were not in it, reading ˝Relic˝ allows you to visit the museum through the pages of a book. Through a review of the exhibit rooms, classroom and labs across, all to the cellars and tunnels underneath the museum. All through the psychological tension and uncertainty of unknown assassin for whom it is not known whether the man or animal, but who walks the museum and kills people.
In addition to being celebrated its authors, the novel Relic is launched a fascinating a literary character – Alojzijusa Pendergast, a special agent of the FBI, which, although not intended to be the main character of the novel, his dialogues, opinions, actions, are so impressive that it overshadowed all other actors.

If you like psychological thrillers with elements of mystery and horror, then this is the book for you!