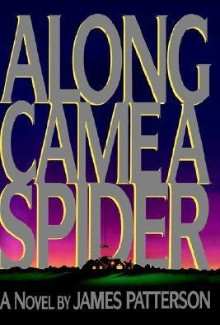 Along Came a Spider

He is from the beginning wanted to be famous. When he kidnapped two well-known wealthy children, came to the front pages of newspapers. Then, one of them is found dead and the entire nation was in shock.

For like this a complex case of need the best people – Alex Cross, the detective who is graduated in psychology and Jezzie Flanigan, ambitious agent of Secret Service – but even they are no match for the killer. He possess discouraging ability , in every moment, to transformed  from a state of the murderous madness in calm soberness. But, whether he was the helpless victim of a double personality disorder – or a brilliant cold-blooded manipulator. And while along with the rest of the country accompanies how to Flanagan and Cross fall into every trap which he made, sure that has managed – holds the strings of the deadly game in the arms and is preparing to withdraw its most devastating move …

James Patterson has so skillfully demonstrated the secrets of the human mind, that in certain parts of the book needs at least superficially knowledge of psychology, in order to truly understand its contents. To the bitter end, holds the reader in suspense. The sudden reversal, this interesting book, makes it even more interesting. Anyone who knows to live up with action of book and its the characters, it can wait end of the book in the conviction that is he himself Alex Cross. Otherwise, this is the first novel by James Patterson in which it appear Alex Cross, an African-American detective who is a psychologist by profession and who working in department of homicide by Washington Metropolitan Police Department (MPDC).

Along Came a Spider is a book that will keep you wrapped up like a nightmare with fast rhythm and packed with suspense. A psychological thriller that will come in your dreams. We strongly recommend this book.