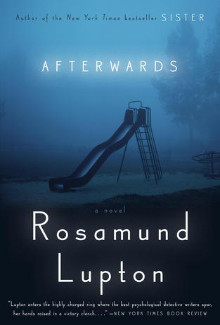 One perfect day.
One terrible crime.

Black smoke makes dirty summer blue sky. In school is fire. One mother by name Grace, saw the smoke and started running. She knew that inside school is her seventeen-year-daughter, Jenny. Get in the blazing building to rescue her. Afterwards the fire, Grace must discover who is burned the school to protect her children from the person who is determined to destroy them. She must overcome the limits of her physical strength and discover the limitless of love. Afterwards is the disturbing story about a mother and daughter, who were seriously injured in a burning school. While the doctors are fighting for their lives, and family despairs, police are trying to determine who is and why set the fire. However, the investigation do not lead police inspectors, already Grace herself, who received severe blow and fell into a coma while is trying to save her daughter. Rosamund Lupton subtly enters in the astral world and follows a police case from the perspective of the soul that is present and sees all but who no one can hear. Suspects are many and everyone could have a reason to burn your school, and even Grace initially fails to perceive the whole picture and find the perpetrator. But when the perpetrator is revealed, Grace realizes that she is powerless in front of the urgent need that the truth apprise “living” and tries to find a way that will reveal their findings.

If you need something frightening, and in same time perfectly human and disturbing supernatural, Afterwards, the novel of author Rozamund Lupton, is right psychological thriller for you.

Dexterity of the author in handling subplots and possible suspects is shiny. Especially in view of the main character Grace, which in themselves reveals strength for which she did not even know to possess, the power that has only a mother whose child themselves finds in trouble. Dismissed teacher, hater, jealous friend, tormented wife and still so much more in the game, that you can not predict the end of this great novel.

Rosamund Lupton creates so wonderful, convincing emotions in all of the characters, that this supposedly the supernormal story operates the feelings, fully human. Warm recommendation for fans of thriller novels.